ABOUT ‘THAT’ COSMOPOLITAN COVER! 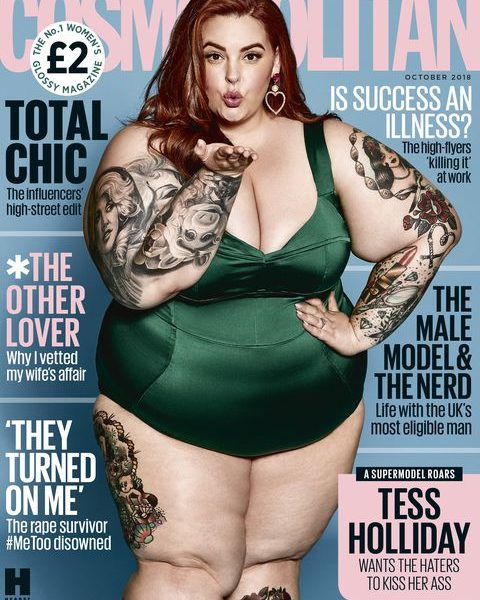 If you haven’t seen it, were unaware of it or do not know who Tess is, this is her bio from her Wikipedia page.

The reason the internet lost its mind was because Tess is a plus size model and the magazine was accused of promoting obesity by having her on the cover.

Phew, I’m literally a COSMO GIRL!! Can’t believe I’m saying that! 😭😭 Thank you @cosmopolitanuk & @farrahstorr for this incredible opportunity 🙏🏻 If I saw a body like mine on this magazine when I was a young girl, it would have changed my life & hope this does that for some of y’all 💕 Issue hits stands 8/31! 🎉🎉🎉🎉 Photo by the incredible @wattsupphoto #effyourbeautystandards

But, does having her on the front cover promote obesity?

People who think I’m glorifying obesity are glorifying stupidity. I am pretty glorious though 💅🏻 Music is ‘Covergirl’ by @rupaulofficial 🎶 #effyourbeautystandards

The main arguments that were being thrown around were that having Tess on the cover as a plus sized model was the same as when underweight models were being used a few years ago.

Here are my thoughts on this;

Let me go through the points above.

Cosmopolitan is a fashion magazine. It is not ‘Women’s Health’. Its job is to showcase fashion and lifestyle and having someone like Tess on its cover can only be a good step as it is showing that there is more than one body type and that women can be beautiful no matter what size or shape they can be.

This is very important as one of the main setbacks for people when it comes to their health and fitness goals is how they feel about themselves and the way they look.

They can get stuck in a cycle of not liking how they look, which causes them to comfort eat, which makes how they feel about themselves even worse.

Making people feel positive about their bodies can only be a good thing.

If you do feel like this sometimes please remember this;

This is where the internet arguments fell down.
Everything was lumped in together.

People said that because Tess is obese, the magazine was promoting obesity and saying that it’s okay for people to become obese with no consequences.

It wasn’t, they simply put a plus sized model on the cover.

This is where the main difference lies.

Being body positive and promoting health are 2 very different things.

Being 21 stone at 5 foot 3 is not healthy and neither Cosmopolitan or Tess said it was.

But, if people can feel more confident about themselves and feel better day-to-day, then they will have more chance of success when they set out to make a change to their health.

"Why the feedback to our @tessholliday shoot proves this is the magazine cover we ALL needed". Hit the link in our bio to read the full piece by @laucapon ❤️ #effyourbeautystandards

This isn’t about looking better, this is about extending your life and reducing your chances of obesity related diseases.

Being overweight or obese will reduce your lifespan.
You will have a higher chance of getting diabetes, some cancers, arthritis, heart disease or stroke.

So, reducing your weight if you are overweight or obese is something to consider for the HEALTH benefits, but these often get overlooked as people tend to focus on aesthetics over health.

Body positivity is a good thing and should be promoted.

But, it should also go hand in hand with health.

Once you feel positive and good about yourself, you will be in a better mindset to take the right steps to become a healthier version of yourself.

This website or its third-party tools use cookies, which are necessary to its functioning and required to achieve the purposes illustrated in the cookie policy. If you want to know more or withdraw your consent to all or some of the cookies, please refer to the cookie policy. By closing this banner, scrolling this page, clicking a link or continuing to browse otherwise, you agree to the use of cookies.. Find out more.