THE S-MUM AND RUSHE FITNESS RAISE €2,000 IN POLAR EXPRESS FUNDRAISER 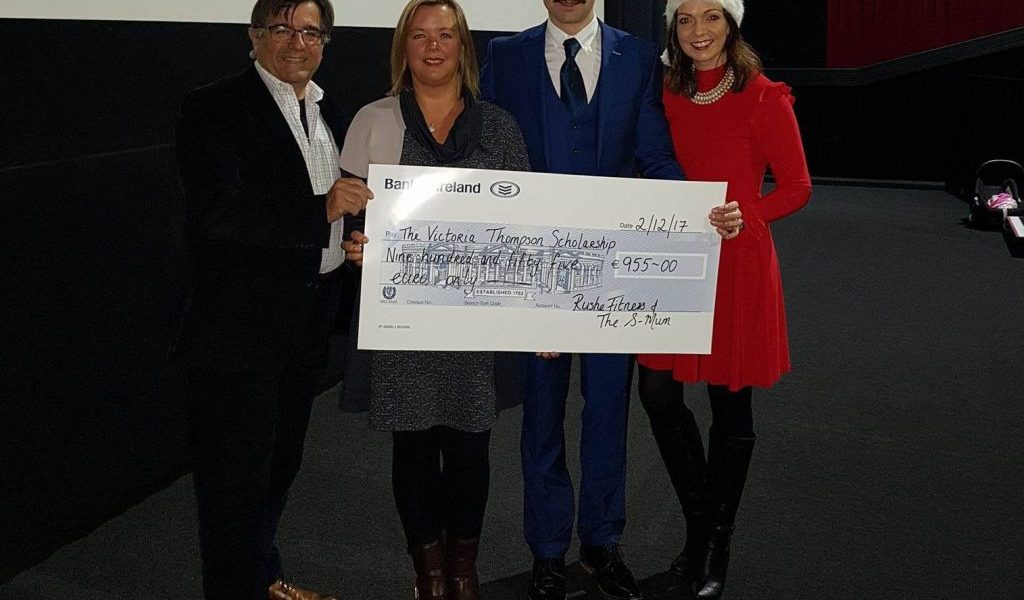 A few weeks ago, Donegal Woman columnists, Maria Rushe (The S-Mum) and her husband Emmet (of Rushe Fitness) decided to run a Christmas fundraiser.

The Jack and Jill Foundation and The Victoria Thompson Scholarship do such incredible work for so many families and children all over the country.  What better cause to do a fundraiser for before Christmas, than children and their parents?

The queues began to form at the cinema from before 11am, with the excited crowd clutching their golden tickets.

Tickets were punched by the Polar Express Conductor, Emmet Rushe himself, (with a real moustache thanks to Movember) and EVERYONE, received a little Jingle Bell, just like the bell in the movie, as they entered.  No one has any excuse not to believe now…

Maria and Emmet thanked everyone for coming and for supporting, before presenting a cheque to Sharon Thompson from the Victoria Thompson Scholarship.
(They’re meeting a representative from Jack & Jill next week to present their cheque!)

Then, the girls and boys were told that the train needed some Christmas magic to get started, and so the crowd sang Jingle Bells before the much-awaited feature.

“Just as we’d hoped, it was WONDERFUL!” said Maria.  “It’s a beautiful movie and the runaway train scene was just as spectacular on the big screen as it was the first time we saw it.  The most magical part for me was when everyone started to jingle their little bells as Santa arrived.  It was AMAZING!”

“We were able to present over €900 to EACH of our chosen charities; The Jack and Jill Foundation and The Victoria Thompson Scholarship.  But tonight, I can happily announce that the final total for each charity is a whopping €1000!”

Brian and Sharon Thompson of the Victoria Thompson Scholarship receive a cheque from Emmet and Maria Rushe, organisers of the Polar Express fundraiser

The event was sponsored by Rushe Fitness and wouldn’t have happened without Anne-Marie, Pete and Mark in Century Cinemas.

Do you have a charity event coming up? Let us know about it on news@donegalwoman.ie